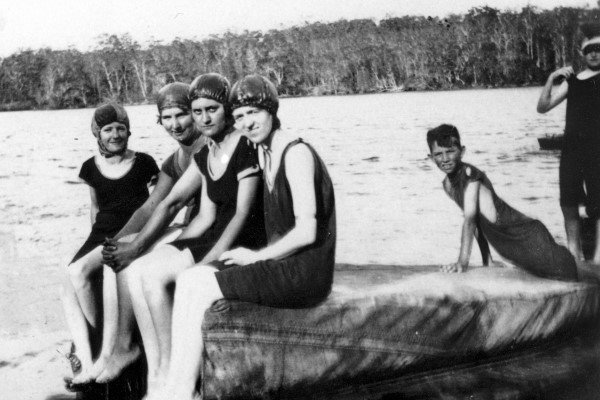 It’s really interesting to reflect on our beautiful Sunshine Coast holiday destinations, and how they’ve become wonderful memories for many generations.

A recent online promotion described Caloundra as a refreshing journey into serenity, with the timeless appeal of a seaside escape and the perfect base to explore the entire Sunshine Coast region. Its natural beauty a haven for any holiday enthusiast seeking the harmony of sun-drenched beaches and crystal-clear waters or the revitalising hinterland air with legendry sweeping mountain views.

On 10 December 1925, a Government Tourist Bureau Brochure stated that Caloundra, with its numerous and magnificent beaches, safe surfing, noted fishing grounds, historic seashores, scenic charms, should someday take its place as one of the principal seaside resorts, in all of Queensland.

You could also ride by steamer and motor launch via Bribie Island, through the scenic Pumicestone Passage. Along the winding channel, Toorbul Point was passed, then the old fish-canning works. You would then see what appeared to be a fenced selections of the sea, which was actually oyster banks protected against the enemies of the shell fish.

Looking further northward one would see the green carpeted sward of the banks on which hundreds of aquatic birds, from the large pelican to small snipe were peacefully feeding, whilst further away great flocks of black swans were gracefully swimming.

This was a very quick journey if compared to the holiday embarked upon by a party in 1883.

The Queenslander, 1 December 1883 described the journey of nine people – four ladies and five men – together with a spring-cart, well stored with modern inventions like tinned dainties.

Setting out from West Moreton they reached Mrs Grigor’s hospitable roof at the end of the first day. After being amply refreshed and invigorated they easily performed the remainder of the journey during the next day. Crossing the country from Mellum Creek by a bush track, they encountered the surveying party engaged on the coast trial survey for the Gympie railroad.

Towards the evening they began to hear the roar of the ocean and found themselves on the hills above the Pumicestone Passage, where they gazed at the view. They were surrounded by beauty on both sides, north and south. They finally made their way to Mr Bulcock’s neat and comfortable cottage.

Accommodation in 1925 was luxurious by comparison to the Hotel Francis, offering electric light throughout, freshwater show baths, septic systems, tennis courts and a bowling green.

The hotel also offered cuisine of the highest standard and a car to meet all trains at the Landsborough Station.

The 1925 brochure quoted that Caloundra was recognised as one of the best fishing grounds. One has their choice of fishing either along the ocean front or in the calm waters of the Pumicestone Passage.

The holidaying party in 1883 also enjoyed the fishing when they bravely crossed the bar with the intention of some schnapper fishing, in which they were most successful, but alas “a life on the ocean wave” and the rolling deep did not agree with them all. Longing for land some of the party made sundry wise resolves on boating in the future.

Not daunted, they decided to try crabbing on what seemed to be a detached portion of Bribie Island, composed of mud and bristling with oysters. After being initiated into the art of crabbing the party began thrusting a forked stick into holes in the mud. When a crab became irate after being disturbed, it is easy fork out. However, they soon learned that an irate crab snapped all around, and it would become a very unpleasant and painful acquisition if you didn’t know how to manage it.

They found the fishing at Caloundra excellent, catching any number of whiting, bream and flathead. Bait consisted of a small blue crab of which nature, with her usual bounty, gave an ample supply.

The party described their visit as one of unalloyed pleasure, recalling memories of the golden days of youth. They spoke fondly about how they would remember their holiday at Caloundra as one of golden memory in years to come.

In 1925, holiday makers created their own memories of Christmas at Caloundra arriving in motor cars and lorries. They enjoyed concerts, jazz evenings and perfect beach weather and much excitement and merriment was reported.

Holidays at Caloundra have created many memories throughout the years and will continue to be part of many memories in the future.

Image 1 – Young people enjoy a swim while holidaying at the King family camp at Coochin Creek near Caloundra, ca 1921

Image 5 – Hotel Francis passenger service cars, Caloundra, 1924. The cars were used to transport holidaying guests to and from the Landsborough Railway Station.

Image 6 – Gympie train at Landsborough Railway Station, 1908. The first train arrived at Mellum Creek on the 1st February 1890 and in 1891 Mellum Creek town changed its name to Landsborough.

City of Beaches : Making a song and dance about Caloundra for the world
November 11, 2019

What Makes Our Community Special?
January 9, 2019

Instagram
What are you up to this weekend? Head in to Spinn

If you haven't already taken a ride on the Ferris